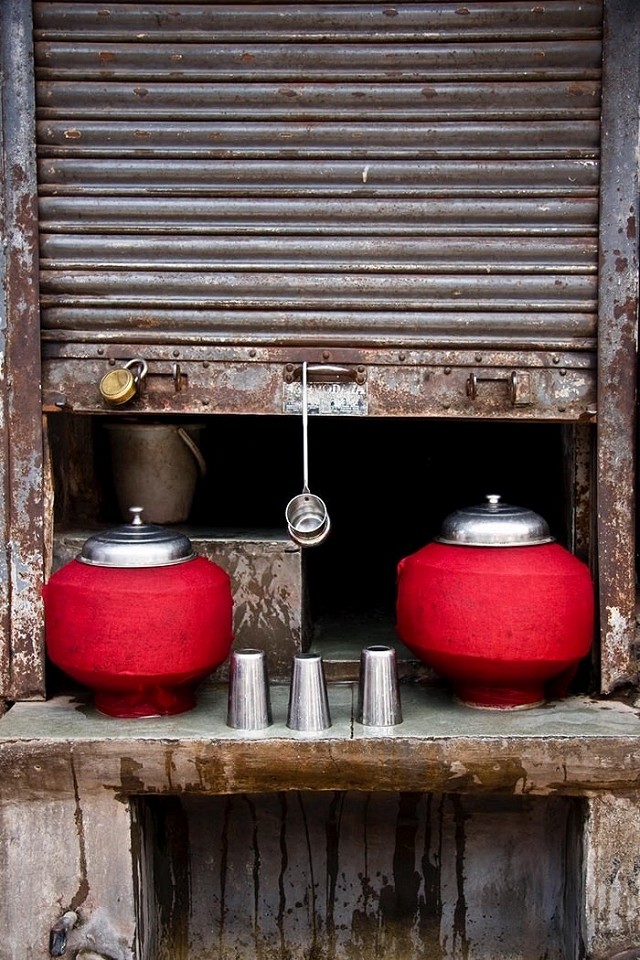 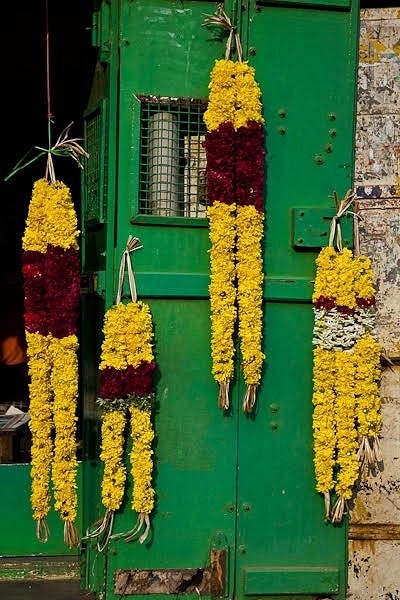 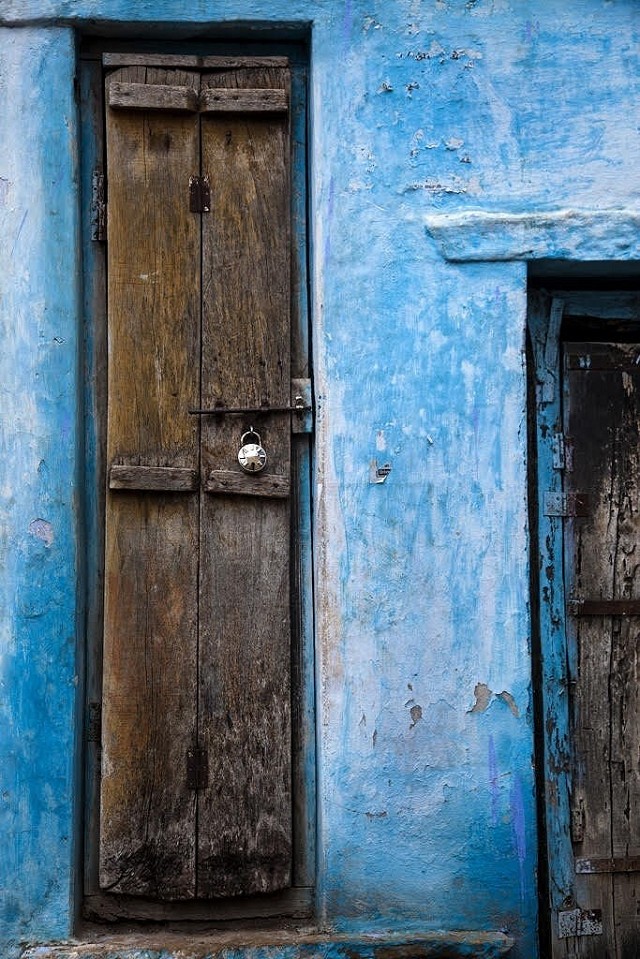 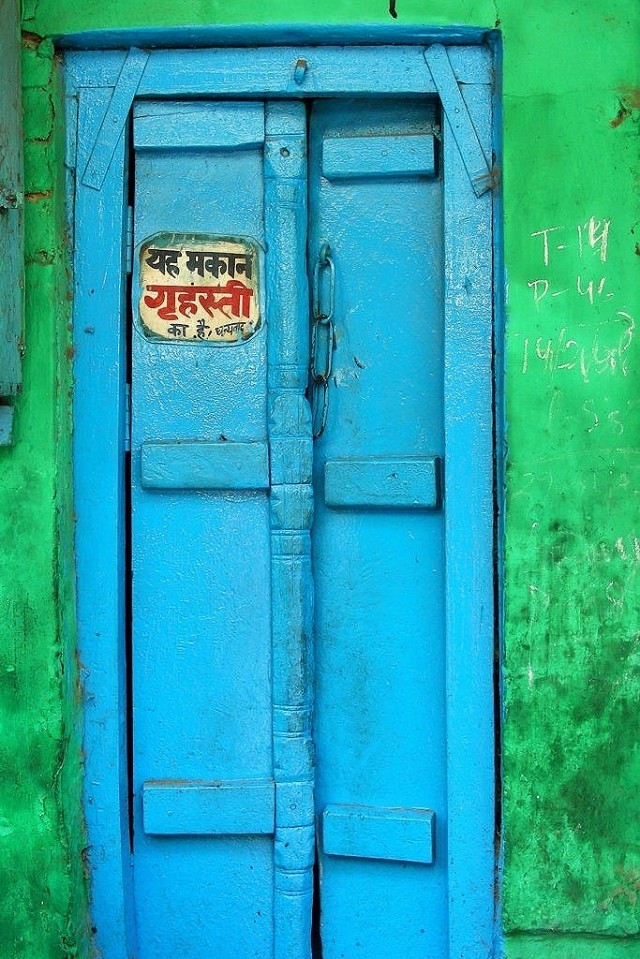 Darwaze, a limited edition self-published photobook, is a compilation of the early works of Delhi based photographer Udit Kulshreshtha. The book comes along with eight collectible art prints of 6"x 8" dimension. Kulshreshtha has documented doors from across the country exploring alleys, nooks, and crannies of multiple cities on foot over a period of seven years. Sometimes the vivid colours of the doors drew him to make a picture and at others, a person staring at the door, and at yet other times, the shape and structure of the doors, the rustic locks, old world latches, peepholes, and so much more. Through his lens the photographer has deconstructed the anatomy of a door in a unique and awe-inspiring manner.  As one holds the book one cannot help but reflect for a good few minutes at the profound cover picture of a man with his back towards the photographer, as he gazes into a slightly parted yellow tent; perhaps, thinking about the world of possibilities if he dares to enter. This picture is just a teaser to what lies in the pages ahead. Turn the pages and what meets the eye are intriguing and poignant pictures of doors which would force you to rethink the way you look at doors, each time you cross one. This book is a must-have in your collection if you are always on a lookout for inspirational creativity and if curiosity is what keeps you going. Kulshrestha says, “These doors have captured my attention, making me wonder. Never knocking on them, never entering, walked by, I always have." He must, then, harbour the inextinguishable fire of curiosity in his core, one that distinguishes his work from the rest.  A self-taught photographer, Kulshrestha, whose photography career spans 13+ years, has worked extensively in the fields of editorial photography, portraiture, and documentaries in his personal and assigned works on the subjects of land based issues in conflicted geographies such as North East India, Women, Child & Health Issues, Culture and Tradition and internal displacement. He has also worked around Conceptual Photography for using the medium of photography as art objects and for advertising. Among his notable and ongoing works are the pictures of Wanchos, a fierce Mongolian headhunting warrior tribe living on the Arunachal-Myanmar borders.

There is rhythm in the opening and shutting of doors, setting in pace, things seen and narrated. The stillness, in crevices, in rusting locks, latches and peepholes, sings. A knock is noise. When photographer Udit Kulshrestha shared one of his works (displayed above), on his Facebook page nearly two years ago, it opened floodgates to curiosity, pressing behind the puffing yellow, a vibrant body of work. What’s behind the door? It would make you wonder. The man in the photograph captured somewhere in Allahabad, has remained in the viewer’s memory, standing tirelessly, blocking gaze with his back, guarding surprises, keeping you, momentarily, out of Udit’s busy thought space. A journey and a travel that had begun with Udit’s words, “So Be It”, have come to an end, shaping into Darwaze, Udit’s series on doors photographed during his work and travels across India. The Allahabad photograph makes the cover for Darwaze, a self-published book compiling works from the series. Udit gave us Darwaze, the book, recently. Doors have fascinated photographers, and will continue to. The pleasure, however, of discovering your own love for doors in towns and cities across India in a photo book, and seeing it flourish into a visual language, is huge. Knowing, that the series gives Udit closure, helps. So, we give the photographer words, and not questions, leaving him with his “inwardness”, once again. Initially, he finds dealing with the words we give, slightly difficult, but he loves trick locks. He has moved on, to narrating, from “seeing”. — Sumati Mehrishi

I was connecting with different things at different times while working on this series. Perhaps, things from my personal life found an outlet during a testing period. I was, sometimes, curious to see life behind and beyond the doors, but I eventually walked past them.

It is a way of seeing. You ought to know the science and language of colour to ensure it works. When I thought through this work, I was seeking colour. There was too much blandness in my life. Perhaps, the series gave me relief. Space Typically, the old parts of towns and cities I have visited and was walking across, trying to build a language using colour and space.

Lives - Lives outside and lives inside

Initially, I looked at blank doors, and gradually, I move along, adding dimensions. Moment you add a dimension, you add another layer to the work.

It is a direct gaze.

I saw a lot of latches. Some locks were very interesting and old. Some added to the picture. I have roots in Aligarh, where locks are made, and they really fascinate me — especially, the trick locks. I have picked many old ones from different cities and towns, including the ones that come without keys.

There is a photograph, Afterlife, taken in 2008. This image makes me look at the alternate utility of doors. It is not always what meets the eye. Also, the closure comes with completion of the series. By 2012, I was able to complete substantial work on the book. By 2016, it was done and out. One phase of my work and life is over with this series.

Sometimes, I would wonder what kind of people and stories live behind the doors. There is a picture with half a door open. Then, there is a door with only one palahraa (plank). How would someone pass through this? It fascinated me. In another picture, there is a door with the advocate’s board on it. There is a cycle. The picture would strike so many thoughts regarding him, his work, how much he earns, and his life. There is a picture where a girl stands at the door, and men in the background playing cards. I look at how doors lead to identity of people behind them and outside. There was never a temptation to open doors. Somewhere in Baroda, I came across a piyaaoo (drinking water for the public). There were two pots and a shutter half-down. I had been thirsty for three hours. The piyaaoo was God sent. It was visually captivating.

The doors become a portal to somewhere. I am moving from ‘seeing’ to ‘story-telling’ — to (building) a narrative.

It happened over work. I haven’t traveled for shooting doors. As I walked the lanes of Old Delhi, markets of Bundi, the streets and Chennai and Kolkata, and other cities and towns, the world outside and within seamlessly merged.

Visual language. I have, sort of, been able to figure it.

This is all I had wanted to see. I wasn’t voyeuristic here (unlike in some of the journalistic works).

Documentary work on the North East. I am looking at the conflict and impact of the Bodoland movement. My work with certain tribes in Arunachal Pradesh, a cultural narrative, will continue. So will my work on Hinduism and what it means to be a Hindu; and a set of photo books. The proceeds from Darwaze will go to chitr sanstha, a non profit foundation to promote photography, co-founded by me; producing and promoting photo books is one of its aims. We are roping in more photographers. There is very less work happening in this domain and we want to explore the space of collectible photo books.

Film and digital equipment. A few phones, a notebook, pens and pencils.